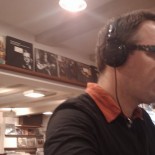 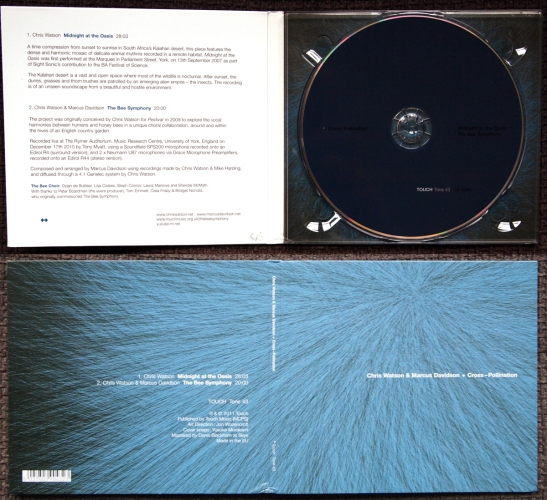 He shouldn’t be a stranger any more: Chris Watson. On his resume we can find Cabaret Voltaire, The Hafler Trio, sound artist for the BBC recording sounds for nature documentaries en of course his solo output of field-recordings from all over the place, going from the South to the North, from East to West and back again. With his field-recordings he has earned his tight place in the Touch catalogue.
For his newest work, Cross-Pollination, we find him working with a fairly unknown artist: Marcus Davidson, who has worked together with Philip Jeck on the 7” spliced and also participates in the Spireproject. Davidson’s main work is in the field of theater/dance music and radio show music.

The first piece of Cross-Pollination, Midnight at the Oasis, is a typical Chris Watson work where we hear the night life from the Kalahari Desert in the Southern regions of Africa. This solo work contains recordings from sunset to sunrise which are compromised to 28 minutes. The sounds start quiet with humming crickets. Though with the night getting darker and darker the volume increases, as do the different voices. A true symphony of animal sounds arises, a micromusic symphony that is. High piercing frequencies reach the ear with small detailed fluctuations. When light returns in the earliest morning you also get aware of the birds in the desert. In the end they even seem to be the king and master with their sounds. Besides the various crickets and birds we also hear much weirder sounds, which can probably be traced back to small beetles and bugs. These sounds are really impressing. Watson really knows how to present this desert in sound. He clearly has a good ear and sense for these sounds. With your eyes closed it even feels as if you are in the desert yourself.

In the second piece we also get to hear the work of Davidson. The Bee Symphony is a symbiosis between nature and humans. The sounds of bee colonies and the human voice are brought together in a search to their harmonies.
Marcus Davidson used recordings the bees that were made by Christ Watson and Mike Harding (Touch head honcho) as base for his composition for five voices (The Bee Choir).
The music starts out with soft field-recordings where we hear some birds twitter and a soft breeze. Quickly an occasional bee pass by which eventually swells up as if you have your head stuck in a beehive. And right at that moment the choir sets in. It aren’t words they sing, but instead the voice follows the sounds of the bees continously. The voice lines are build up from microtonal shifting sounds which creates a humming drone that creates a harmonic symbiosis with the bees. At some points you can’t even tell the different voices apart. It can be bees, it can be human voices, you just can’t tell. It is a pure cross-pollination between nature and humans. The music contains huge dynamic variations where both voices go through the whole volume spectrum. This creates a continuous tension which makes you want to listen over and over.

The two pieces on this CD really fit together, even with the totally different methods used. In both there is a search to the natural harmony between different organisms. Cross-Pollination is one of Chris Watson’s best works and with this one of the most beautiful documentations in field-recoridngs en the several options with those. In Midnight at the Oasis you are continuously grasped by the nightly desert life and The Bee Symphony explores a whole new territory in symbiosis of human and animal.
Highly recommended.

Buy the release and listen to a sample: http://touchshop.org/product_info.php?products_id=464

This entry was posted on September 7, 2011 by Sietse in Review.